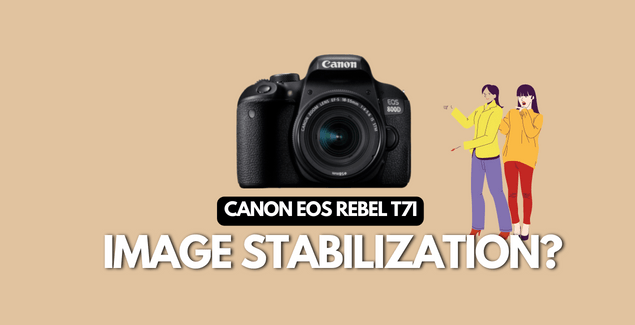 Are you a tad curious about the image stabilization of Canon EOS Rebel T7i? No doubt, the Canon 800D (Rebel T7i) is an excellent DSLR camera for photos. However, our research showed it’s also great for videography.

The Movie Digital IS works best for normal, handheld videos such as vlogging or video-shooting on the go. However, the Enhanced image stabilization option helps reduce extreme motion blur due to camera shake when recording videos.

The Canon EOS Rebel T7i has an in-camera 5-axis Digital IS. The cameras with 5-axis Digital IS have built-in gyroscopes that give image stabilization along five axes which are pitch, roll, yaw, horizontal, and vertical.

Furthermore, the image stabilization in the movie mode helps the camera minimize the shakiness when recording handheld and provides crispy-smooth footage. If you’re looking for steadiness in your footage across five axes, then Canon EOS Rebel T7i should be your choice.

Since this DSLR camera doesn’t record 4K video, the ability to shoot video at 24 to 60 FPS seems to be compensating for the absence of a 4K video-recording facility. However, most filmmakers shoot short films or documentaries at 30 fps, whereas 24 fps is best for shooting YouTube videos.

It’s quite difficult to pick the difference between 23.98 and 24 frames per second footage. Most photography and videography experts agree that both 23.98 and 24 frame rates are quite similar. Usually, the content for OTT platforms and videos for social media platforms such as YouTube are shot at 24 fps.

25 fps isn’t commonly used by social media content creators. Instead, it’s normally used for TV broadcasts. You should keep in mind that both 24 fps and 25 fps look quite similar from the result standpoint. However, there is a slight difference between both these frame rates. Furthermore, in most DSLR cameras, you have to change the video mode to PAL for recording 25 fps footage.

Ever wondered about choosing the right one between the 29.97 and 30 frame rates? Both frame rates are similar. Some cameras have both of these frame rates. However, the Canon EOS Rebel T7i (800D) only has 29.97 frames per second. It is the universal frame rate. If you have no idea what frame rate to choose for videos, then select 30 FPS without worrying about the details.

50 FPS is quite uncommon. You won’t videographers or vloggers using 50 fps. However, It is considered not that different from 60 fps. Keep in mind that filming in 50 FPS or 60 FPS is very subjective. For instance, if you want to make slo-mo, you must choose 60 fps over 50 fps.

60 fps is one of the most popular frame rates, especially among filmmakers and YouTubers who want to shoot slo-mo footage. The beauty of shooting in 60 fps is that you can make your slo-mo footage somewhat similar to 120 fps, but it could only happen if you’re a professional camera user. The Canon EOS Rebel T7i can shoot up to 60 fps.

Hassaan is a blogger and YouTuber. He loves to make YouTube videos, discover new video ideas, and try out new camera gear equipment. If he isn’t making videos or writing camera gear articles, then he is probably playing with his dog.

We use cookies on our website to give you the most relevant experience by remembering your preferences and repeat visits. By clicking “Accept”, you consent to the use of ALL the cookies.
Do not sell my personal information.
Cookie SettingsAccept
Manage consent

This website uses cookies to improve your experience while you navigate through the website. Out of these, the cookies that are categorized as necessary are stored on your browser as they are essential for the working of basic functionalities of the website. We also use third-party cookies that help us analyze and understand how you use this website. These cookies will be stored in your browser only with your consent. You also have the option to opt-out of these cookies. But opting out of some of these cookies may affect your browsing experience.
Necessary Always Enabled
Necessary cookies are absolutely essential for the website to function properly. These cookies ensure basic functionalities and security features of the website, anonymously.
Functional
Functional cookies help to perform certain functionalities like sharing the content of the website on social media platforms, collect feedbacks, and other third-party features.
Performance
Performance cookies are used to understand and analyze the key performance indexes of the website which helps in delivering a better user experience for the visitors.
Analytics
Analytical cookies are used to understand how visitors interact with the website. These cookies help provide information on metrics the number of visitors, bounce rate, traffic source, etc.
Advertisement
Advertisement cookies are used to provide visitors with relevant ads and marketing campaigns. These cookies track visitors across websites and collect information to provide customized ads.
Others
Other uncategorized cookies are those that are being analyzed and have not been classified into a category as yet.
SAVE & ACCEPT